A Rare Breed of French Origin 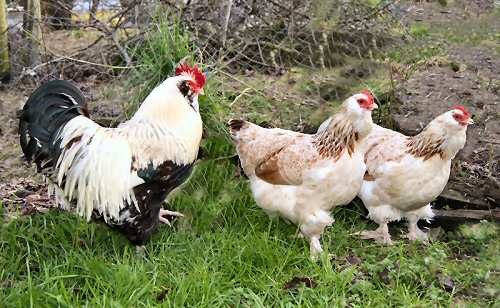 Faverolles are a poultry breed of French origin and are named after the small village of Faverolles in Lower Normandy, situated amongst farm land some 250 kilometres west of Paris.

Faverolles have muffs and a beard, five toes, foot feathering and an attractive plumage pattern. Salmon colouring is the most widely available colour which is sexually dimorphic. This means the female colouring differs from the male colouring and chicks can be reliably sexed from the age of 10 days.

Originally Faverolles were a meat breed with tender light coloured meat (in comparison to other heritage breed meat). They are among the smaller heavy breeds and the birds we currently have here in New Zealand are mainly kept as layers who never go broody. They lay a cream coloured egg of medium size. They mature slowly and take up to 10 months to lay their first egg but once they lay, five to six eggs per week can be expected during the laying season which is not interrupted by broodiness.

Faverolles are calm and sometimes timid and, unless they are able to enjoy unlimited free range, should only be kept with other heavy breeds. They don’t scratch as much as the commercial hybrids or some light breeds and do little damage when allowed to free range.

Their main attractions are their looks, their calm temperament and their tendency to be very ‘chatty’. 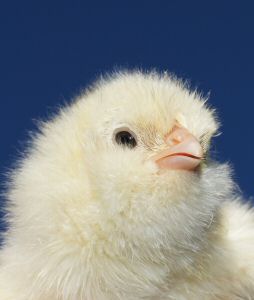 Faverolles hatch with their
muffs and beard visible.

10-day old Faverolles chickens. Female on left, male on right.
Thanks to Marina Steinke for supplying information and photographs.