Every time a breed dies out its genes are gone forever – or are they?

Maybe not – at least not in the case of the Cochin in New Zealand.

This once very popular magnificent fowl of Chinese origin provided most of the genetic make-up for the Buff Orpington, which was created in Great Britain during the late 19th century. Another breed – the Buff Plymouth Rock – also has a large proportion of Cochin genes in its genetic make-up.

If it was possible to wind back time, to back trace the breeding steps in reverse order that led from the Buff Cochin to the Buff Orpington and Buff Plymouth Rock – then there could be a way to recreate the Cochin the way it once was – before eager poultry breeders transformed the once productive upright and proud fowl into a ball of fluff with meagre laying abilities.

The big opportunity came in the early 1990s when Robert Bennet of Ashburton hatched a pullet chick with feather stubs on her legs from eggs laid by his exhibition Buff Orpingtons. This pullet was of no use for Robert Bennet’s Buff Orpington breeding programme and would have been discarded had it not been for Roger McCormick, who had always hoped to have the Cochin among the fowls he breeds. Thus this pullet with white legs and feather stubs became the foundation bird for the recreated Cochin in New Zealand. As the Cochin has yellow legs with feathers along the legs and outer toe, Roger used the Buff Plymouth Rock to provide the yellow legs and its share of Cochin genes. 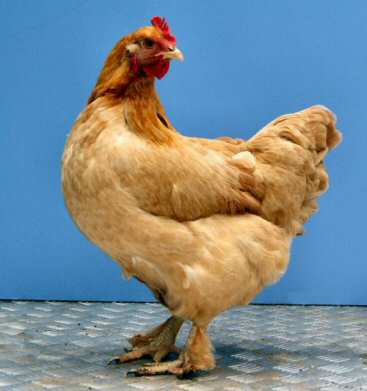 After hatching many hundreds of chicks over a period of some 20 years to be able to again and again select the ones with better leg feathering than their parents, Roger succeeded in breeding a bird that does not only look like the Cochin as depicted in Brett’s Colonists’ Guide, which was published in the late 19th century, but even more importantly, also has all the sought-after characteristics it once had. And best of all – today’s Buff Cochin in New Zealand has not been ‘created’ by crossing a Pekin Bantam with a Buff Plymouth Rock but by only using the genes that lay hidden in two large breeds for over a century.

As there were no Cochins in New Zealand for many decades, most people who would like to know what a Cochin fowl looks like usually get to see pictures of Australian, American or British Cochins which tend to be large balls of fluff with profuse leg feathering. These overseas Cochins look stunning – but are they as useful as the original Cochins of colonial times?

Roger recently gave me a copy of the February/March 2006 issue of Australasian Poultry, which features an interesting article titled ‘Breeding Bigger Cochin’ written by Megg Miller, which, in my opinion answers this question. I quote with her permission: “Forget all notions of utility, they are indifferent layers and slow maturing. As well, they consume large amounts of food. Consider the breed an ornamental one, albeit very interesting, and ensure you have a well set-up house for them. Their profuse leg feathering is damaged by wet, muddy conditions, so protection is advised, and they can’t fly up to normal perches or nests, so very low ones are needed. On the plus side, the breed is amazingly docile and will cause little damage to gardens and lawns.” 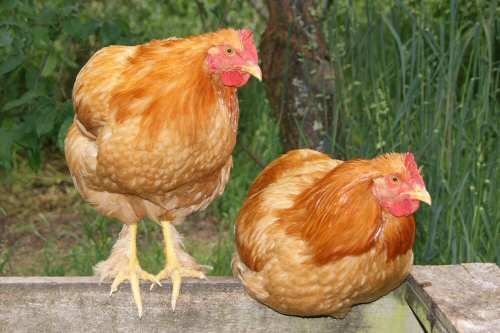 The above description of the Australian version of the Cochin does not fit the Cochin we have in New Zealand. The New Zealand Cochin is docile but still an eager forager and we can’t claim that they cause little damage to gardens and lawns. However, when it comes to utility qualities, the New Zealand Cochin is very well worth keeping for its beauty and its good table qualities, its excellent laying abilities coupled with early maturity and good mothering qualities. The birds are active and alert and can be kept in standard poultry housing.

And let’s not forget that in an economic climate that is slowly changing for the worse, more and more people go back to producing their own eggs – just like the early settlers did. And fewer people are able to feed and keep birds that don’t pay their way – just like during the time of the colonists when the Cochin was so popular.

Those who also want to breed their own replacement birds will be pleased to know that the Cochin is the ideal breed to achieve this without the help of an electric incubator. A Cochin hen will raise 12 to 14 large breed chicks three times per season if she is allowed to sit on her eggs. If the priority is for her to lay as many eggs as possible per season she just needs to be prevented from sitting on her eggs. 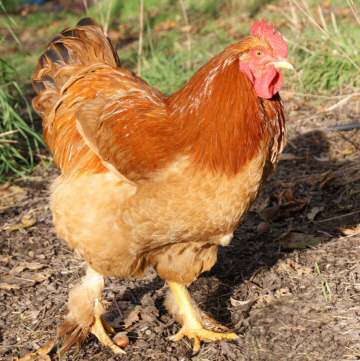 The recreated Cochin in New Zealand is a most beautiful fowl with its golden plumage and upright stance. The roosters are not aggressive and both hens and roosters can become very tame. Some people prefer clean-legged fowls fearing that the feathers on the legs and feet will become dirty during wet weather. Considering how popular the Pekin has become during recent times – a bantam with much more plentiful leg feathering than the Cochin – the feathered legs should not be of any concern unless the fowls are kept in a caked dirt run that turns into a muddy swamp during winter. No fowl should under any circumstances be kept under such conditions.

Another bonus of the recreated New Zealand version of the Cochin is its early maturing. The pullets start to lay when they are six months old and the cockerels make good eating from about four months onwards. The growth of the chicks is phenomenal but this also means that they have to be fed well and with good quality food. This is in contrast to most other heavy breeds, which can take up to nine months to mature and start to lay.

In a country like New Zealand, where the importation of new poultry breeds is strictly regulated and prohibitively expensive, the addition of a recreated breed to the relatively small number of breeds we have here is very exciting indeed. I think we should be proud that a talented New Zealand breeder was able to bring long forgotten genes back to life and recreate a very productive dual-purpose breed.

This slightly amended article was first published in Rare Breeds NewZ in August 2011.