The Shire is the largest – and one of the oldest – of the British horse breeds. Among its ancestors were the chariot horses of the Britons – described and admired greatly by Julius Caesar two thousand years ago.

For centuries its primary role was as a War Horse (its original name). It has also been known as the Great Horse and the Strong Horse.

Strengthened by crossing with horses imported from Europe (e.g. Friesian), the breed was steadily increased in size and strength as the chain mail and then plate armour of its riders increased in heaviness. This attained its greatest weight in the reign of Henry VIII. An Elizabethan writer estimated that the average Great Horse could carry up to four hundredweight (450 pounds or 205 kilograms).

As the requirements of warfare changed, so other uses were found for these immensely strong horses – notably the hauling of carriages and heavy carts on the poor roads of the times. Their use for pulling farm equipment was a further development.

The modern breed known as the Shire reached its present form by development from the Great Horse in the Shire counties of middle England. The English Cart Horse Society was founded in 1878 and in 1884 became the Shire Horse Society. (The Stud Book for stallions, however, goes back to 1800.) 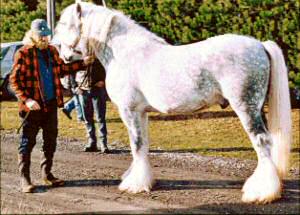 Although black is historically the characteristic colour of the Shire breed, grey was also regarded as indicating pure blood. Other colours appear more commonly nowadays. A mature stallion can stand up to 18 hands (1.83 metres) high and weigh up to 1000 kilograms, with mares and geldings generally being less massive.

The name ‘Shire’ was being used in New Zealand in the 1890s, and Department of Agriculture records indicate that Shire horses were being used and bred here at the beginning of the twentieth century.   However, in a 1938 publication, The Breeding and Management of Live Stock, it is noted that “So far as can be ascertained, there are no Shire horses in New Zealand, although they are used to some extent in Australia. For average farm work in New Zealand, Shires are considered a trifle too heavy ...”

Since that time, the breed has been re-established here.